How to Keep Your Pets Safe During a Remodel

How to Keep Your Pets Safe During a Remodel

When remodeling your home, it can be easy to forget about the little details that make all the difference. For example, keeping your pets safe may not be something you’ve given much thought about because you’ve been so busy planning out the specifics of your home remodeling project.

However, it’s important to keep our animal friends in mind when a remodel is underway. Often, when you’re not home to supervise, your pet could be in harm’s way or feel anxious with all the changes that are taking shape. What’s a pet owner to do to keep their pets happy and safe during a remodel?

How Can I Keep My Pet Calm When Visitors Arrive?

Your pet’s stress can begin even before construction starts. And this can lead to an uncomfortable situation for everyone involved. Whether your pet is friendly or not, it’s best to keep them away from visitors because if your contractors are nervous or jumpy, it can make your pet nervous as well.

Dogs love to jump on visitors and can be very disruptive. So, if your pet is roaming freely during the initial consultation, it can make it hard to communicate and cause a lot of distraction.

To keep your pet calm when visitors arrive at your home, there are a few things you can do. For example, when visitors knock, stay calm. Your dog will take cues from you that everything is okay, which makes them less likely to get anxious. Otherwise, if you’re greeting your contractors in an excited voice, your pet could get wound up and potentially nervous during the visit.

You might also consider removing balls or other toys that excite your dog. Instead, give them a stimulating, tasty distraction, such as a treat puzzle or Kong filled with peanut butter.

If this isn’t helpful, you can place your pet on a leash or in their crate (if they are crate-trained). These solutions keep your pet from running around the house and from jumping on your visitors. It also restrains them until the initial excitement is over.

How Can I Keep My Pet Calm And Minimize Stress During The Remodel?

Obviously, the best and safest thing to do is keep your pet out of the house during the remodeling process. However, this might not always be feasible for you. In this case, work with your contractor to not only monitor the progress of your project, but to also be aware of which days will be the loudest and most dangerous for your pet.

During construction, we recommend making your furry friend as comfortable as possible. This might involve having all their familiar toys and bedding available for easy access. You can also play soothing classical music, or turn on a TV to help them cope with loud construction noises.

If I Need To Bring My Pet Through The Work Zone, What Hazards Should I Watch Out For? 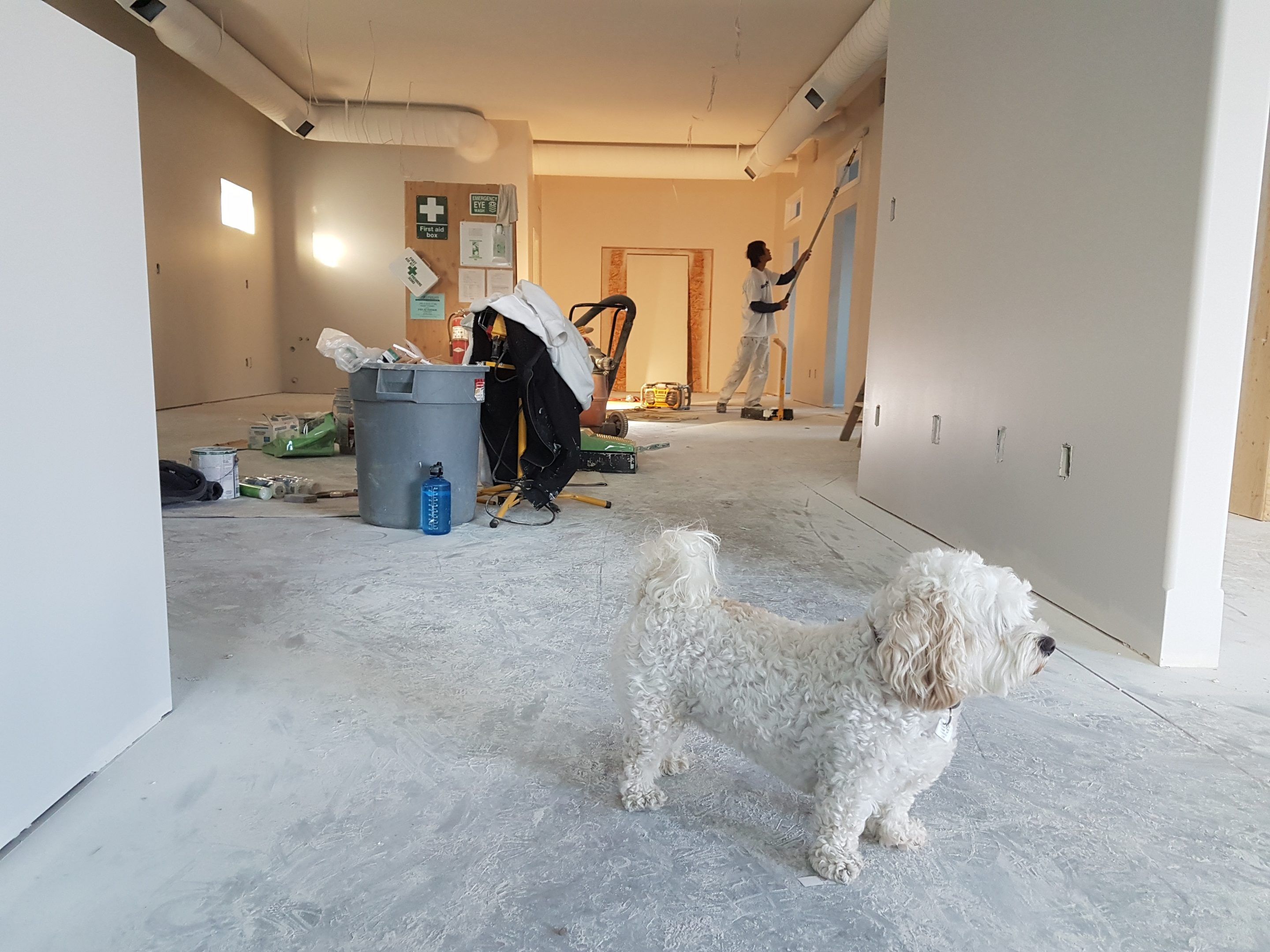 Keeping your pets out of harm’s way is important because, during renovations, there’s often a lot of debris lying around, such as nails and electrical wires that could still be on.

You might also have to worry about fiberglass insulation, which can be harmful when swallowed. Dust is another issue to concern yourself with, as pets can’t handle lung irritants as well as humans can.

Pets aren’t equipped with the tools and mindset to protect themselves from certain hazards like a contractor would be. Some pets are constantly licking themselves (i.e. cats and dogs). So, if any dust from the air gets on them, they’ll lick it off their fur and paws.

You also have to think about smaller animals, which are even more susceptible to potentially dangerous gases, odors, and fumes that result from home remodeling. For example, birds can die from paint fumes, or any kind of fumes, due to their extremely sensitive respiratory systems.

If for any reason you can’t find a place to safely take your pet, it’s critical that you monitor them to make sure they stay out of danger. If possible, you might also consider sequestering your pets in a room or side of the home that’s free from construction activity. Just make sure you notify your contractors or leave a note on the door to remind them there’s a pet in the home.

What Are Some Signs Of Stress My Pet May Exhibit During The Remoeling Process?

If it’s not possible to get your pet out of the home for the duration of your remodeling project, watch out for signs of severe stress. For example, your cat might hide more than usual, refuse to eat, or go to the bathroom outside the litterbox. Your cat might also be unusually aggressive, breathe rapidly, or start shaking.

Your dog might self-isolate, skip meals, pant heavily, or become unusually aggressive. If your pets are showing any of these signs, try to make them as comfortable as possible. Make sure your cat has plenty of places to hide, or give your dog their favorite item with a familiar scent.

During Certain Parts Of The Project That Will Be Loud Or Upsetting, What Is The Best Place To Take My Pet?

If you know that one particular construction day will involve some especially loud noises or hazards, try to get your pet out of the house.

If you have a family member nearby who doesn’t mind watching your pet for a day or two, bring them there. You might also consider taking your pet to work (if feasible), asking a friend to watch them, or taking them to a boarding facility.

How Can I Maintain A Normal Routine For My Pet During The Remodel? 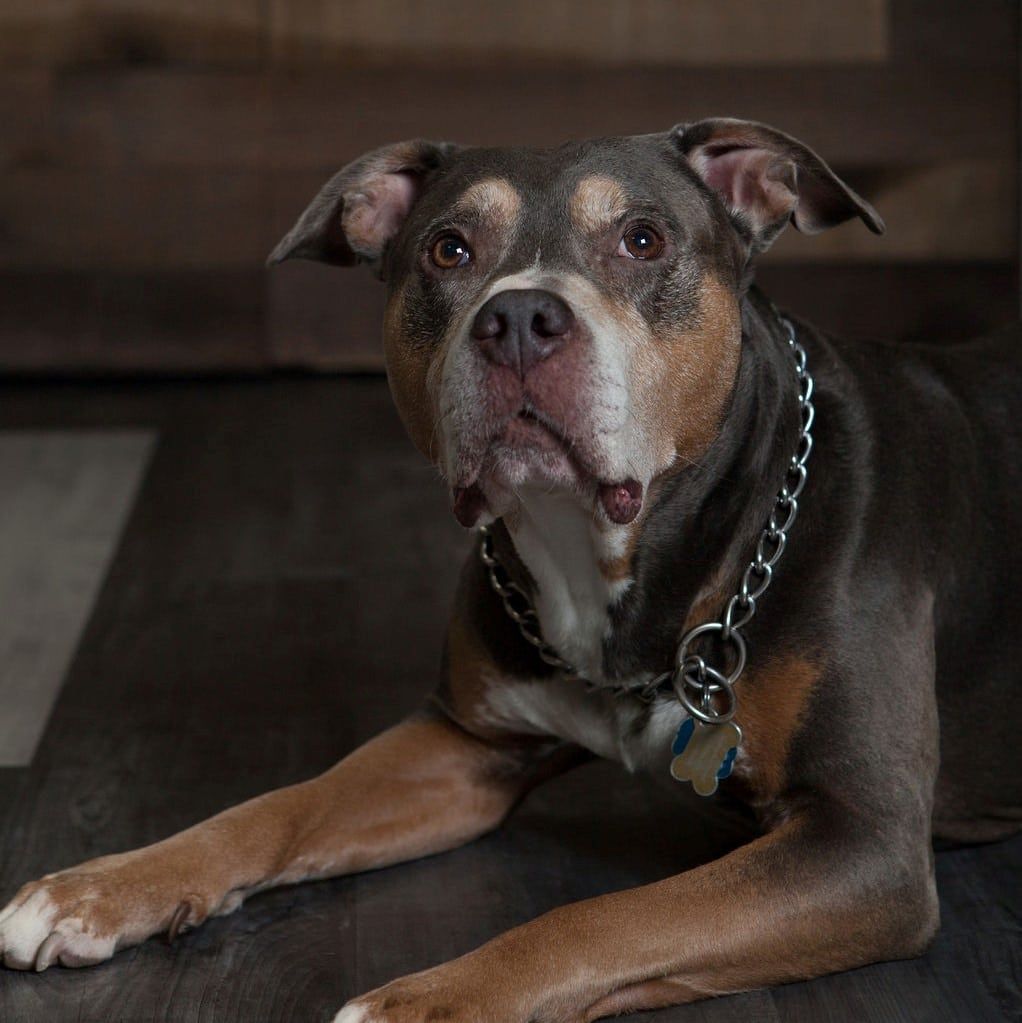 During renovation, things can be hectic, and you might be a lot busier than usual. However, it’s important to make sure you’re maintaining a sense of normalcy for your pet. This should involve maintaining their feeding and walking schedule as well as making sure they get plenty of playtime to burn off any anxious energy.

FearFreeHappyHomes.com – Story of Living Through a Home Remodel With Cats and Dogs

Renovate Your Home Hassle-Free With McManus Kitchen and Bath

At McManus Kitchen and Bath, we love pets and know how important animals are to every family. (In fact, every photo in this blog is a picture of a pet from a member of the McManus team!). That’s why we want to give you some knowledge on how to keep your pets as safe as possible during your remodel! If you are looking for a remodeler that has your family’s best interest at heart (even the non-human members) then don’t hesitate to contact us today!

McManus Kitchen and Bath is a design and build company specializing in kitchen and bath remodels.